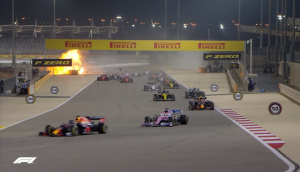 A short film documenting the fireball crash of former Formula 1® driver Romain Grosjean was one of the winners from the 2021 SPORTEL Awards, which took place in October at the Grimaldi Forum in Monaco. Whilst Romain walked away from the crash, the outcome could have been very different, which is why Formula 1® has generously donated the SPORTEL Awards €2,000 prize money to Queen Victoria Hospital.

The former Haas team driver, who retired at the end of the 2020 season, was engulfed in flames after crashing at 140mph at the Bahrain Grand Prix in November last year. The Swiss-Frenchman was only saved by his Haas’ halo device and racing suit, which is designed to withstand flames for 20 seconds. Incredibly, he managed to jump out of the car and escape with only burn injuries to his hands and ankles.

Titled “Romain Grosjean’s Escape – Bahrain 2020”, the footage from Phil Rorke of Formula One Management Limited took the Best Slow Motion Prize at the awards. Due to the injuries he sustained, the Formula 1® team, and Romain himself, wanted the winning prize funds to go a hospital that cared for other burns patients.

Queen Victoria Hospital in East Grinstead is known around the world for having pioneered burns treatment during WWII treating pilots with severe burns. Its commitment to innovation continues as it provides life-changing reconstructive surgery, burns care and rehabilitation services for people who have been damaged or disfigured through accidents or disease.

Nora Nugent, consultant plastic surgeon and burns lead at Queen Victoria Hospital, said “We are very grateful to Romain and the team at Formula 1 for this donation to our hospital through our QVH Charity. Donations such as this really help us fund the things that are above and beyond core NHS services.

“Thanks to donations like the one from Formula 1 and Romain we have recently received two virtual reality headsets from QVH Charity which we use when burns patients have to change their dressings. It can be painful sometimes so these virtual reality headsets are helping to reduce pain by providing a welcome distraction for our adult and paediatric patients. These innovative types of equipment make a huge difference to patients.”